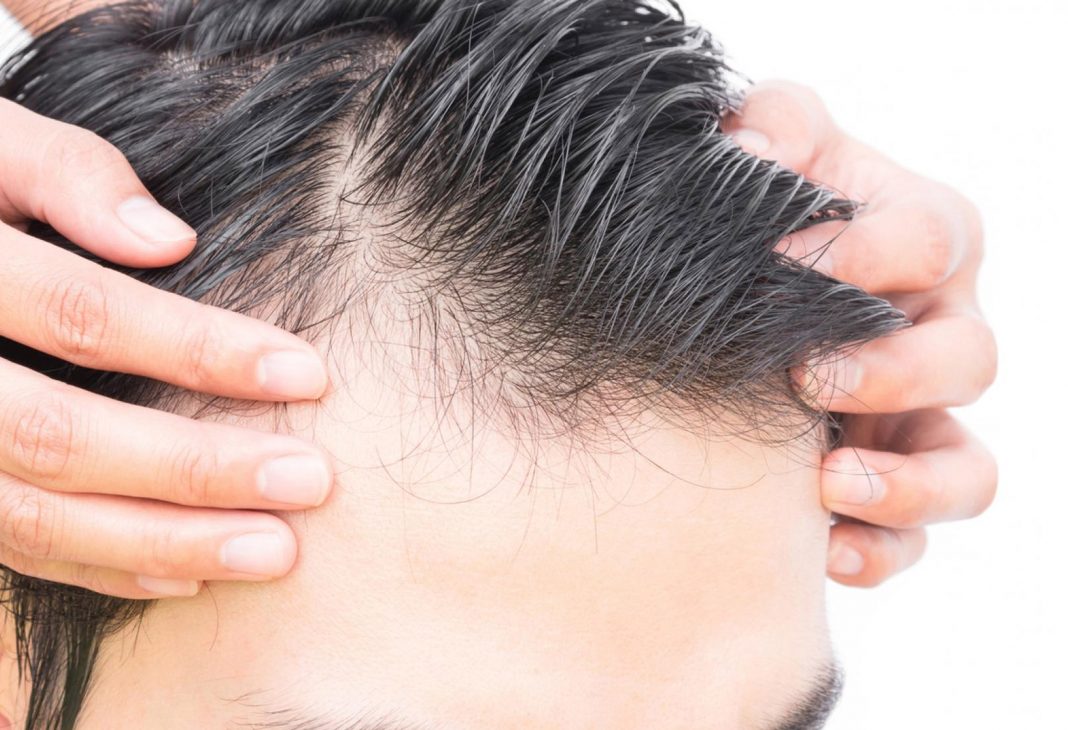 ALOPECIA, the acceleration of hair loss.

In dermatology, alopecia refers to the acceleration of hair loss. Alopecia is generally referred to as alopecia when this hair loss exceeds 100 hairs per day over a long period of time. Baldness (the condition of a bald person) is the ultimate development of alopecia.

A person has an average of 100,000 to 150,000 hairs and loses about 40 to 100 hairs per day (permanent loss), with peaks of up to 175 during seasonal changes (seasonal loss in spring and fall). It is during this phase that hair is renewed the most. Hair loss is considered pathological when a person loses more than 100 hairs per day for a fairly long period of time, up to two months. The diagnosis of this fall requires a consultation and sometimes an examination called a “trichogramma” (a few hairs are taken from different areas of the scalp and observed under a microscope). Baldness is defined as baldness when the fall is located on the forehead, above the temples and at the top of the skull. Sometimes, a hormone test is necessary in women. The results of these examinations point to one of the following problems.

Hereditary androgenetic alopecia
The most frequent, it manifests itself in a decrease in hair volume, even baldness, and affects 70% of men (20% of men between 20 and 30 years old, hair loss generally starting around 20 years old and stabilizing at 30 years old6).
acute alopecia
It can be linked to chemotherapy treatment, stress, severe nutritional deficiencies, iron deficiency, hormonal disorders, acute radiation;
localized alopecia
It can be caused by skin problems (tumor, burning, hair loss), radiotherapy or parasites (ringworm, lichen);

Alopecia areata
Alopecia areata seems to be of autoimmune origin (cellular mediation mechanism) which is characterized by a more or less large “patch” involvement and in one or more places. This form of hair loss can affect the entire head and is referred to as alopecia totalalis and sometimes the whole body: it is alopecia universalis, and in this case, there is no hair or hair on the whole body.

The phases of the hair cycle

The catagen phase:
The catagen phase is a resting phase during which the hair stops evolving. It lasts about 3 weeks, which is considerably less than the previous phase.

Androgenetic alopecia is a gradual loss of hair due to the influence of male hormones. It usually appears between the ages of 30 and 40, in an average of 70% of men, but in some cases it can appear as early as age 16. The causes of hair loss are multiple, the hormone traditionally implicated is dihydrotestosterone (or DHT). Nevertheless, the scientific community agrees that it is not the only one responsible, so epitestosterone could play a significant role in the process.

This hair loss usually begins in the temporal gulfs and temples (on the front of the head) and vertex (the top of the head). It is characterized by hair thinning and loss, which can be sudden in some individuals and slower in others. The Hamilton scale, modified by Norwood, allows baldness to be graded between 1 and 7, where 1 is the absence of baldness and 7 is the maximum alopecia (total hair loss on the gulfs and vertex).

It should be noted that the referencing established by the Nordwood scale does not cover all cases. A significant number of men are affected by alopecia similar to that traditionally found in female subjects, which affects the skate and is measured using the Ludwig scale.

A 2011 study shows that androgenetic alopecia is not caused by the decrease but by the inactivation of stem cells contained in the hair follicle. These cells do not transform into “progenitor cells” in the hair, causing the follicle to atrophy and produce only microscopic hair. Thus a bald man has the same number of hairs as a person without baldness but they are not very visible because of their microscopic size

This is the most common cause of baldness in women. It occurs after menopause, when the protective role of female hormones has disappeared. The hair becomes more fragile, its lifespan decreases and permanent alopecia eventually appears. In women, hair loss is more diffuse and widespread than in men. Thus, the woman does not have bald patches, she rather notices an overall rarefaction of her hair. This process rarely leads to complete alopecia. Hair on the sides is spared. Typically, there is a progressive widening of the median line which can be classified into different stages (Ludwig classification9).

Before menopause, an iron deficiency, as it can be seen in the case of heavy menstruation, could also be responsible for hair loss. A state of chronic stress can also cause alopecia or certain dermatological diseases such as alopecia areata.

Apart from hormonal causes, hair loss can be caused by deficiencies in iron, copper, zinc, silicon, B vitamins. This type of hair loss is estimated to affect about 20% of people on a moderate to severe diet. However, it is more often associated with bulimia or anorexia problems. Most often, the person will regain their hair after a period of time that can go up to 2 years.

Some drugs (chemotherapy) and poisonings cause sudden hair loss (even at very low doses, for example, in the case of acute polonium-210 poisoning).

Alopecia of this type is one of the effects of acute radiation syndrome.

Pelade is a disease that causes hair loss and/or hair loss in defined areas. The cause of this disease remains unknown but an autoimmune mechanism that leads to an attack of the hair system by the immune system is believed to be responsible for the damage.

There are mainly three types of hair loss:

The risk of developing alopecia of the areata type during his or her lifetime is just under 2%, regardless of sex. The disease occurs in almost half of all cases in young people under 20 years of age. Less than one in ten cases progresses to a severe form.

The hair, at the edge of the area, is thicker at its distal point than at its origin. Microscopic analysis of the skin of the area (histology) shows that the hair follicle is surrounded by lymphocytes, immunity cells. The follicle is not destroyed, which explains the possible regression or healing of alopecia. In most cases, this examination is not necessary to confirm the diagnosis.

The evolution is towards improvement or cure in almost half of the cases in one month, but recurrences are frequent.
Moderate forms do not require treatment, except for cosmetics. Injecting corticosteroids into the hairless area can cause hair growth, but with possible side effects. However, the simple application of a corticosteroid ointment has not been shown to be effective. Ointments with 2,3-diphenylcyclopropenone (DPCP) or squaric dibutylester acid (SADBE) are of moderate efficacy. Dithranol or minoxidil-based creams can be of a certain amount.

Originally marketed under the name Proscar to treat benign prostatic hyperplasia, finasteride was found to have an effect on hair loss and even hair growth by blocking DHT type 2 which is believed to be responsible for male pattern baldness. According to clinical studies, in 82% of cases it causes stabilization of the fall and in 60%, a more or less significant regrowth. Pregnant women should never handle a Propecia tablet, as the product has been shown to cause malformations in male fetuses.

The long-term side effects of Propecia are still unknown;

They are usually temporary and reversible when treatment is stopped, but not always.
Permanent sexual disorders have been documented. The most common side effects associated with taking finasteride are decreased libido, erectile dysfunction, decreased ejaculate volume, altered ejaculate texture, abnormal breast and testicular sensitivity, allergic reactions (rash, hives, itching, gynecomastia and fatigue).

The propeciahelp site has more than 1,400 people complaining about persistent side effects associated with finasteride use. A study by Dr. Irwig involving members of this site showed that 94 percent of men have developed decreased libido, 92 percent suffer from erectile dysfunction (with no morning erection) and 69 percent have difficulty reaching orgasm. On average, men used finasteride for approximately 28 months but experienced sexual side effects for 40 months after stopping treatment. It is important to note that these figures only concern people who have given testimony on the site.
Consequences for the fetus following Propecia use by the pregnant woman are cited and this drug may affect the woman’s (and fetus’s) internal organs23.
More recent studies have shown that Propecia can promote depression and possible suicidal tendencies.

Finasteride should not be taken by women or children.

It can be absorbed through the skin

Minoxidil is the first drug marketed to treat baldness, under the name Rogaine, and under several other generic names (Alostil, Kirkland, etc.). Its action is unknown, but some researchers believe that this drug would dilate the blood vessels, resulting in greater blood flow to the scalp and more nutrients to the hair root. It must be applied to the scalp twice a day and when it is stopped, the hair obtained with the product falls out. Two dosages are available: in 2% and 5% versions. Only the 2% version is usable by women. Men can use it, but compared to the 5% version, its effects on hair growth and maintenance are much lower.

Like finasteride and minoxidil, dutasteride (en) was not intended to treat androgenetic baldness, but rather to treat benign prostatic hypertrophy. This drug is said to be 1.5 times more potent than Propecia in reducing DHT (figure to be confirmed, as it is not accepted by any government agency as a drug to treat baldness, and is not recommended at all, as not all its side effects are yet known in the long term). People who have tried it for a few months have often described side effects that are very similar to those of Propecia, but are also stronger because of the significant reduction in the DHT hormone. The percentages of people suffering from a side effect would double compared to Propecia.

Alopecia Areata, condition that causes hair to fall out in small patches