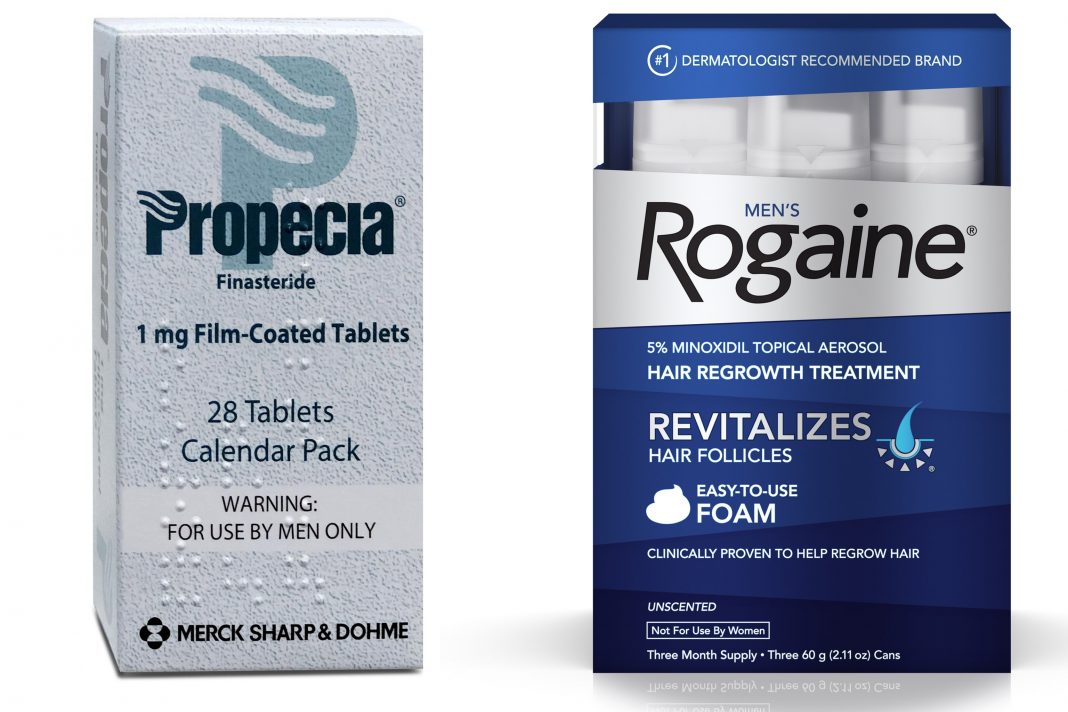 Hair loss is a worldwide problem that affects many millions of people. Since ancient times, attempts have been made to combat hair loss with a wide variety of remedies. The market for products is huge, so it is surprising that hair loss remedies are available in very small quantities. At this point we consciously separate the drugs from other forms of therapy, because it is usually the remedy of choice for doctors and there are certain official basic requirements for the proof of efficacy and harmlessness. And in fact, regular treatment in many cases is successful in stopping hair loss or even generating new hair growth. As already said, the number of drugs for hair loss is manageable, worldwide only the following preparations are important:

In special forms of hair loss, such as Alopecia areata, other products are used, but should not be discussed here because their use is limited to specific clinical procedures.

As manageable as the number of drugs is – there are even fewer treatment approaches in terms of mode of action.

However, only finasteride is approved for use worldwide as the two active ingredients differ in their strength. Dutasteride, on the other hand, is usually only sold as a remedy for prostate problems. Both products are currently used almost exclusively in oral form, and despite their generally good tolerability, there are reasons to be cautious about the necessary long-term use.

Studies have shown that Minoxidil stimulates hair growth by improving the blood supply to the hair follicles, among other things. It is important for the product to be used for as long as the effect against hair loss is desired.

But of course Minoxidil does not work in all cases, depending on whether the aim is to stop hair loss or to achieve real new growth, there is always a greater or lesser number of people affected who do not benefit from the treatment.

Finasteride is also an anti-androgen, its mode of action over the inhibition of 5-alpha-reductase is somewhat different from the other products in this group, however, and its effect is limited to a few places in the body such as prostate and hair follicles.

Known compounds from this group are flutamide and cyproterone acetate, but also the diuretic spironolactone and the antimycotic ketoconazole. The problem with the more widely effective antiandrogens is that they can trigger feminization in men. Studies could also prove no effect, at least if one presupposes a certain quality of the study design.

In a comparative study by Gassmueller et al. Minoxidil showed a clearly pronounced effect, while the comparative product Fulvestrant showed no change in hair growth.

The study results with antiandrogens are also not convincing in women.

The S3 Guideline, therefore, does not recommend the use of these products.

Testosterone is the most frequently occurring anthropogenic hormone in the blood. In male fetuses, it stimulates the development of male sexual characteristics but is converted in the cell to DIHT which binds to the androgen receptors. It also plays a role in skin phenomena such as acne, making it an interesting research object from various aspects, and with dutasteride, it was actually possible to significantly increase the effectiveness of finasteride once again. The minimum inhibitor concentrations on the enzyme are less than one twentieth, or vice versa the serum DHT level can be lowered substantially more clearly (95 % compared to 71 % with finasteride)

However there is also a clear difference in the half-life, this is five weeks with dutasteride compared to 6-8 hours with finasteride

This means in practice clearly worse controllability of the treatment, just when it should come to side effects (Azzouni et al)

Nevertheless, dutasteride offers an interesting alternative, because in the existing studies a clearly better efficacy was shown compared to finasteride.

In an analysis of the available studies, a clear superiority showed up in all examined aspects such as hair number, evaluation of the results after photographs of the different hair sides and in the evaluation of the users. Interestingly enough no difference resulted regarding the side effects against it. (Zhou et al)

In this respect, there is a lot to be said for the use of dutasteride, but with the problem that the product is not normally approved for use in cases of hair loss.

If one looks at the available range of products, it is a concept that the simultaneous use of finasteride and minoxidil can possibly lead to an improvement in therapy. In a 2018 published study, 0.25 % finasteride together with 3 % minoxidil was compared to 3 % minoxidil alone in the treatment of male alopecia.

90 % of the participants showed an improvement in their situation in the combination, significantly better than a pure minoxidil solution (Suchonwanit et al).

A similar result was achieved in the combination of oral finasteride application with topical minoxidil. Here finasteride was combined with 1 mg per day and a five percent minoxidil solution, and compared with the products alone.

The combination therapy showed an improvement in 94% of the men, while with finasteride alone 80 % and minoxidil only 59 % were (Hu et al).

It is frustrating that in a market of millions of customers, very few products can medically solve the problem of hair loss. But a lot of companies are developing new solutions. Unfortunately, the past has shown that in many cases hopes are raised that cannot be fulfilled afterward in reality. Science still knows far too little about the exact process of hair growth to be able to use it in a targeted way. Therefore, the methods can be roughly divided into the following groups:

1. agents that strengthen the effect in a known way (i.e. further developments of minoxidil and finasteride)

2. Biological extracts which are obtained from the blood according to certain procedures and which contain growth factors, even if they are not known in detail: PRP treatment is of particular importance here

3. Hair multiplication, i.e. using certain cells or parts of existing hair to multiply and use them later.

– a new substance called Clascoterone (BREEZULA) by Cassiopeia is based on an antiandrogenic mechanism of action and the targeted blockade of DHT and promises an effect at least equivalent to that of finasteride and minoxidil. (https://www.hairlosscure2020.com/cassiopea-says-breezula-phase-ii-results-very-positive/)

The extraction procedure with PRP is discussed elsewhere, strictly speaking, it is not a drug. However, the boundaries between drugs and biological therapy are blurred, because ultimately this natural extract contains certain active substances, even if they are not yet known.

Even if it sounds so simple – in practice, the cultivation of the body’s own hair cells is a very difficult undertaking. This is due to the problem that hair and its surroundings form a functional unit, which is not so easy to produce in practice. Nevertheless, there are a number of companies that are trying out the breeding model.  For example Hairclone from England (https://www.folliclethought.com/page/2/)

A real breakthrough is not yet recognizable, and also marketing will have to fight with security requests from the authorities. Because it must be clearly formulated that a growth promotion and replication also carries quite fast the risk in itself to lose here the control over the process – and thus with uncontrolled cell growth.

Decades passed since the last hair loss product was approved by the responsible authorities. Even if there are no concrete candidates at the moment, there will be further alternatives in the foreseeable future.