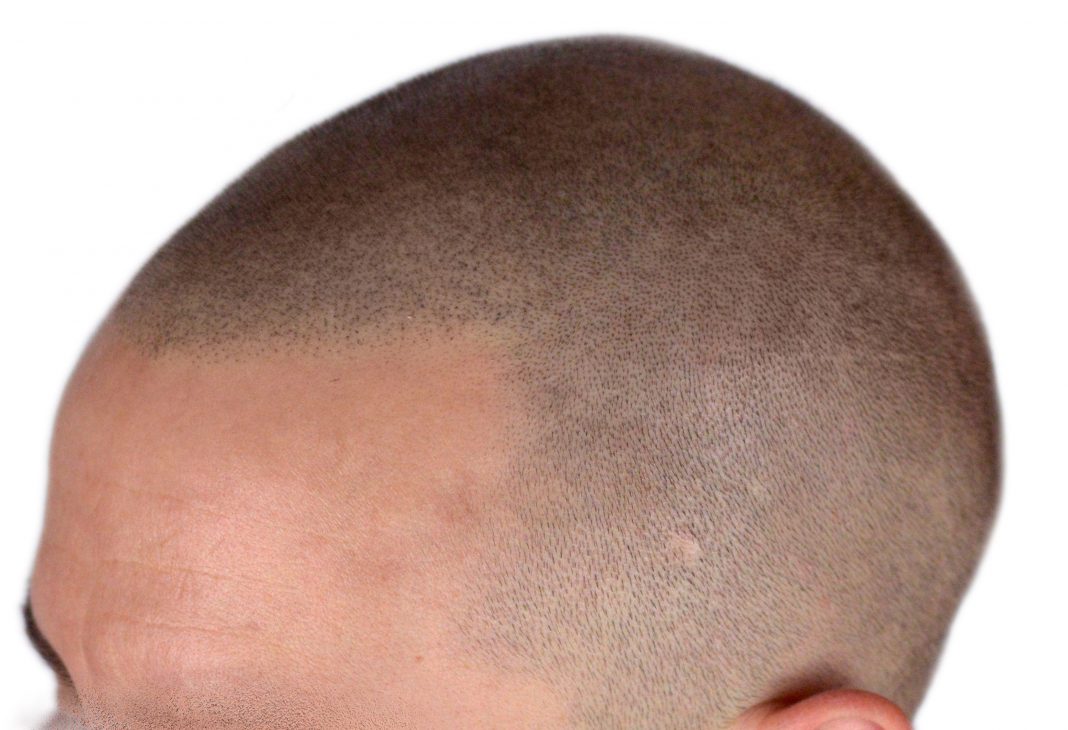 Scalp micropigmentation, also known as tricopigmentation, is an aesthetic practice aimed at camouflaging hair loss, whichever its cause is, from the most common androgenic alopecia to more peculiar pathologies such as alopecia areata or total. More specifically, it is a technique that foresees the inoculation under the skin, using a needle, of countless small and point shaped deposits of pigment in order to simulate the presence of rising hair. In fact, performing hundreds of these dots on the bald areas of the scalp allows to optically recreate the appearance of a shaved head. With scalp micropigmentation, it is also possible to give the illusion of more thickness, in the cases that still see the presence of hair, but thinned, by reducing the chromatic difference between the skin and the hair. Finally, this technique allows hiding possible scars on the scalp, both due to hair transplant procedures or traumas.

Tricopigmentation is conceptually born from tattoo, in fact, many people that do not know the matter very well tend to get confused and consider them the same.

Before explaining in a more detailed way the differences between tricopigmentation and tattoo it is necessary to make a clarification that frees us from any possible confusion. There are two possible kinds of tricopigmentation: the temporary one, that is performed with re-absorbable pigments, and the permanent one, that does not fade with time. Both the techniques have advantages and disadvantages and there are different evaluations to make when choosing one technique or the other.

Among the two techniques, is it clear that the permanent one is more similar to the tattoo since in both cases the treatments are irreversible. The only way to remove a permanent SMP or a tattoo is with a laser. However, this does not mean that consequently tattoo and permanent tricopigmentation are the exact same identical thing. Since SMP foresees the exclusive making of small and round shaped deposits of pigment, the specific instrumentation for this technique is different from the one of the tattoo and it is specifically focused on that aim. On the contrary, since performing a tattoo also means drawing lines and shapes, the instrumentation for the tattoo allows making any kind of shape or draw, not only dots. This difference in the instrumentation affects both the machines used and the needles. For example, the protocol of Milena Lardì, one of the most qualified professionals of the field thanks to her enormous experience, foresees the use of needles characterized by a specific round wall aimed at precisely releasing a controlled amount of pigment in order to exclusively perform little dots.

The differences with the tattoos mentioned above concern both permanent and temporary tricopigmentation. This last one however also has further differences with tattoo. In particular, temporary tricopigmentation is performed using different pigments that can be reabsorbed by the body over a few years. Moreover, the inoculation process is performed in a more superficial layer of the skin compared to the tattoo. Also, this factor is one of the causes of the pigment fading with time. Furthermore, given those different features, the tricopigmentation treatments end up being less invasive and less painful.

As mentioned above, there are different types of possible tricopigmentation treatments. Let’s see them more in detail here below:

TRICOPIGMENTATION AS PART OF THE FIGHT AGAINST HAIR LOSS

Tricopigmentation is only one of the many methods developed through the years to hide or camouflage the hair loss. Luckily, it is a treatment that does not turn against the other methods, on the contrary, they can work together to bring even better results.

In addition to this, tricopigmentation does not prevent from using specific drugs to cure hair loss. In these cases, there only are some precautions to follow, such as stop taking Minoxidil the week before the tricopigmentation treatment and then start again one week after, but the two things can keep on safely co-existing and give their best results together.

Something similar is true also as far as the use of micro-fibers is concerned. For anyone who wishes to increase the density of their scalp, they can be used to apply microfibers that anchor to the natural hair and so give a greater volume. In this situation a person may wish to undergo a density effect tricopigmentation treatment in order to stop using the microfibers, since with tricopigmentation it is possible to achieve a similar effect, or to combine the results of the two treatments to have both the benefit of a higher coverage granted by tricopigmentation and of a greater volume granted by the fibers. It is definitely possible to join together the two methods, but also, in this case, it will be necessary to follow some directions in the period in which the tricopigmentation treatment is carried out.

THE IMPORTANCE OF ADDRESSING TO SPECIALISTS OF THE FIELD

When the care of someone’s appearance is concerned and when it is handled by the hands of someone else it is always essential to spend a few words on how important it is to turn to professionals that have the most appropriate instrumentations and materials, as well as the expertise and the experience necessary to guarantee the best result possible.

Tricopigmentation is a treatment that concerns a well visible area of the body, the head. In particular, the area of the hairline significantly affects the way in which the face appears, since it frames its features. To know that such a visible aspect is involved surely makes you ponder about how important it is to put yourself in the right hands. This reasoning is certainly true when we talk about permanent tricopigmentation, but it remains valid for the temporary one that in any case takes at least a few years to totally disappear.