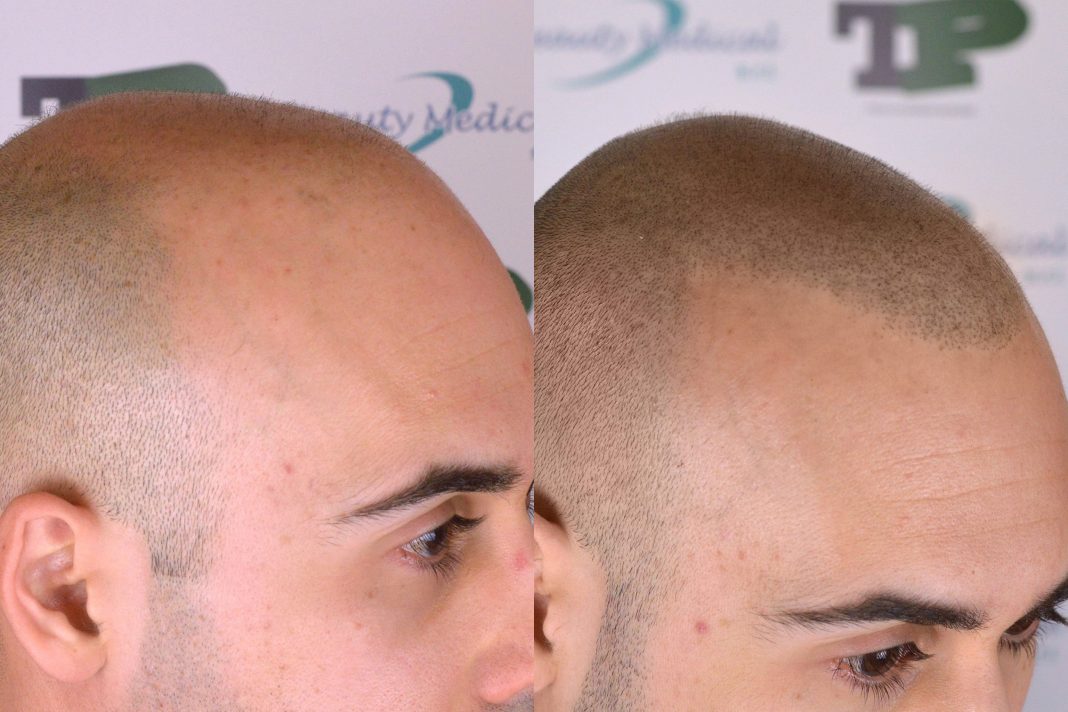 Male androgenic alopecia usually shows itself as an initial recession of the frontal hairline/vertex and with the following processes of miniaturization and hair loss on the superior area of the scalp. With tricopigmentation it is possible to go and take action specifically in these area, filling the vertex and the mid scalp and rebuilding, also totally, the area of the frontal hairline.

THE IMPORTANCE OF THE RIGHT HAIRLINE

The frontal hairline is nothing but the line above the forehead that establishes the border between the hairless skin and the hair.  Normally, in Caucasian men, it has the shape of a more or less pronounced U or  V, while the afro men tend to have it straighter. Regardless of the shape, it is a very visible area of the body. Its absence, or its being higher or lower, can significantly modify the appearance of a face. For this reason the reconstruction of the frontal hairline allows who suffer from the hair loss discomfort to regain confidence in the social relations.

The effect of having a still intact frontal hairline is not exclusively achieved by really having hair in that area, but also by simulating it with tricopigmentation. In fact, scalp micropigmentation allows to have a shaved, and not bald look, with the frontal hairline well present and framing the face. Of course, a correctly performed tricopigmentation involves the creation of a totally natural hairline, visible, yes, but not exaggeratedly marked and strong. In the frontal area in fact hair is naturally less dense and the technicians have to stick to this naturalness. It is a mistake to believe a more marked hairline to be aesthetically more beautiful. On the contrary, if it is too evident it will look totally fake, which clearly is not the aim of who decides to undergo this treatment. Also because of this reason, it is important to turn to a technician that both has the right technical competences and the right notions to advice the client with the best and most natural solution possible.

In addition to the level of definition, there are some other characteristics of the frontal hairline that you should keep in mind if you want to obtain a realistic treatment. For example, in nature, it is almost never totally symmetrical. While rebuilding it with tricopigmentation one may think that it would be better to draw it perfectly specular on the right and on the left sides, but such a choice could affect the naturalness level of the final result. Likewise, one may wish to undergo a tricopigmentation treatment with the aim of significantly lowering it in order to reduce the recession of the hair. This idea derives from the belief that a receding hairline is a defect and a symptom of hair loss, while instead, it is a totally physiological phenomenon that also characterises who still keeps all of their hair. A competent technician will never satisfy the request of a very low or straight hairline because he will be aware of the inevitable final unnaturalness of a treatment carried out this way.